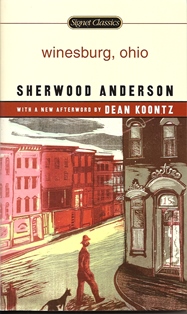 
Chicago Heights, an award-winning, short, experimental black and white feature film made its Chicago debut at the 2010 Black Harvest Film Festival at the Gene Siskel Film Center. This film based on Winesburg, Ohio was created by two GSU professors. Daniel Nearing was the director and Sanghoon Lee was the producer-cinematographer.

The book selection of Winesburg, Ohio was a tie-in with the movie's release.